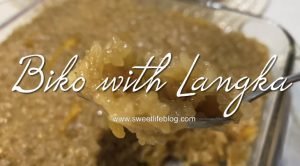 Biko is glutinous rice or malagkit na bigas cooked with Latik sauce or Caramelized Coconut milk. The jackfruit or langka adds flavor to the Biko. Latik or toasted coconut milk curds may also be put on top of the Biko for added flavor.

In the Philippines, the Biko vendors would put the biko on a bilao (large woven tray) with banana leaf which serves as a wax paper so the biko won’t stick on the bilao.

This recipe is easy to make as it only has 5 ingredients. Here’s how to make it:

If cooking over stove top, cook over medium heat. Once it boils, lower the heat to simmer and cook the rice for about 10-15 minutes or until the water has evaporated.

Turn off the heat and let it cool. Set aside.

Cook the Latik Sauce and Langka

On a pan, pour 2 cans of Coconut Milk (400 ml per can). Turn on the stove top to medium heat and bring to a boil. Once boiling, add one cup of brown sugar and mix until incorporated. Bring back to a boil and simmer until the latik sauce thickens. Add the jackfruit, stir occasionally and cook until the latik sauce is caramelized.

I used Demerara brown sugar for this recipe. The color and sweetness of the sugar will vary according to the type of sugar used. You will need to adjust the amount of sugar to add according to taste.

Combine the Cooked Sweet Rice and the Latik Sauce with Langka

Once the latik sauce is caramelized, add the cooked sweet rice and mix until incorporated. Continue mixing until the rice has absorbed the latik sauce and the rice is sticking together. Transfer to a serving dish. Serve and enjoy!

Cook the Latik Sauce and Langka

Combine the Sweet Rice & the Latik Sauce with Langka

This recipe is good for 4-5 people. The color and sweetness of the Biko will depend on the type and color of the sugar used. Adjust the ingredients according to taste. Keep in the fridge if there’s leftover. Heat up in the microwave for 10-20 seconds ( depending on microwave heat settings). Serve and enjoy!
Keyword biko, biko with jackfruit, biko with langka, glutinous rice, malagkit na bigas, Our Sweet Life Blog, pinoy food, sweet life blog, sweet rice, sweet rice cake
Tags: biko, biko with langka, sticky rice Welcome to Sweet Life Blog and thanks for dropping by. My family and I are delighted to share with you our love for food, family fun, travel, crafts and learning new skills. Please join us on this wonderful journey to a lovely, rich and meaningful sweet life.